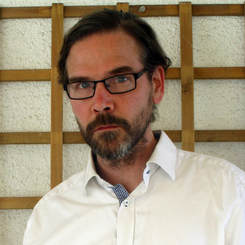 Visual artist, musician, curator and producer
www.sebastianboulter.com
​
Currently living in Athens, Finnish citizen Sebastian Boulter is curating Finnish artists to exhibit their works in Athens and Greek artists to participate a group exhibition in the exhibition hall of Cultural Affairs of the City of Tampere, Finland. In 2006-2012 he worked as a curator and art producer in the Centre of Contemporary Art Pispala in Tampere, Finland. In 2001-2008 he produced cultural exchange projects between Finland and Lithuania in cooperation with Uzupis Art Incubator, Vilnius, Lithuania and in 2009-2010 with Artsakh Art Union and the Ministry of Culture of Nagorno-Karabakh, both supported by Cultural Affairs of the City of Tampere, Finland.

From 2012 to 2017 Boulter lived in Brussels where he did research on gentrification, street art and coordination with cultural centres of fine arts and social activity. He did his Master degree of painting in the Royal Academy of Fine Arts of Brussels in 2015 and worked as a painter in his studio, doing solo exhibitions and participating group exhibitions in Belgium and Germany. His artwork often refers to environmental issues as the infrastructures of cities and pollution and manipulation of rivers.

He has done one independent documentary film, Man and the River – a portrait of António Cabrita, who is an environmental activist in The Algarve, Portugal. Boulter’s musical background is based on classical guitar. He has composed music mainly for contemporary dance groups, theatres and films. Please find the documentary and examples of recorded music below.

Man and the River from Juha Mehtäläinen on Vimeo.